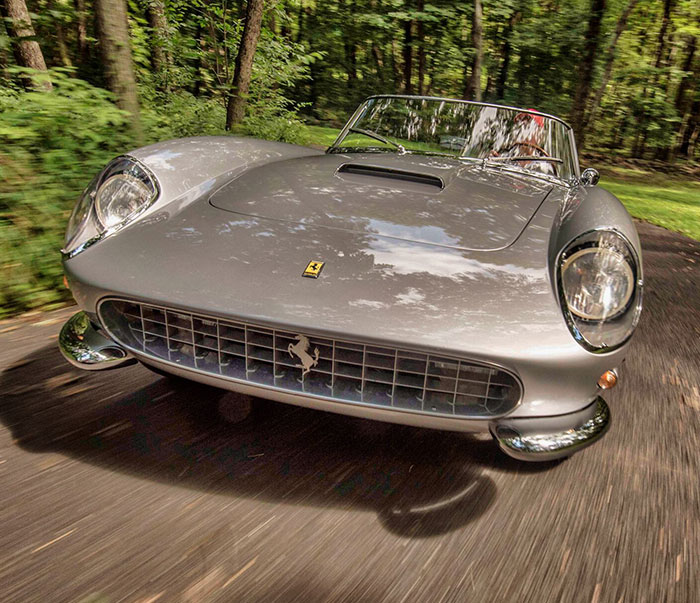 The heart of the 250 series of which there many variations was the Colombo V12 3-litre engine.  Ferrari used this engine with great success from 1954-1964.  In the Series 1 cars, it was configured with a single overhead cam and ‘inside plugs’ producing 220 BHP.  It was a ‘long wheel base’ car at 2600mm, followed later by the SWB cars of 2400mm.  The bodies were steel to give more support to an open car. As Richard Heseltine writes in Ferrari Legends (Merrell Publishers, 2008) “It was a car for the elite: nominally a production model but in essence a series of egregiously expensive one-offs tailored to suit the whims and fancies of individual customers.  Those fortunate enough to be able to buy one of these exquisite machines as they were built included royalty, industry tycoons and the obligatory beautiful people: Prince Ali Kahn (husband of Rita Hayworth), Prince Mohamed Al Faisal of Saudi Arabia, racing gadabout Porfirio Rubirosa, and Count Giovanni Volpi di Misurata.” In the case of 0799 GT, the chassis frame (type 508C) was sent by Ferrari to Pinin Farina in October of 1957.  The instructions were: covered headlamps and no side vents.  The car is fitted with engine type 128 C, gearbox type 508 C, and differential type 508 C.  The body color was Nero MM 11911, and the interior color was Naturale Connolly 3218.  The car was completed in February of 1958 and sold in May of that year to its first owner, Dino Fabbri of Milan.  It was resold later that year to another Milanese, Guido Monzino.  The third owner, Valentino Blancardi, bought the car in February of 1959, and sold it to Italo Musico in January of 1961.  During his ownership, the car was returned to the factory in Modena and fitted with disc brakes and size appropriate Borrani wire wheels.  In June of 1962, Musico sold the car to Antonio Antorina, it’s fifth owner.  Maria Antonietta Lodi bought the car in October of 1964.  She was the sixth and final Italian owner.  The car was then shipped to the United States in 1967.

The new U.S. owner of 0799 GT was Tom Meade.  The following year, 1968, he sold it to Kitt Tucker.  In 1970, Tucker sold the car to Peter Bowers of Houston, Texas.  Bowers sold the car to Michael Sheehan in March of 1989.  Sheehan transferred the car to Andreas Zenari of Elite Diffusion in Switzerland who sold the car to a client named Bernhard Friedli Von Muhlenen and his partner in the purchase, Andreas Gerber.  Friedli arranged the sale on behalf of himself and Gerber to sell 0799 GT to Motorauto Marbella in Marbella, Spain.  Motorauto traded 0799 GT to Shoreham Investments, who in turn transferred it to Clarksdale.  In 1993, the car was shipped to the United States by a broker working for Clarksdale.

In 1994, the car was sold to Classic Coach Repair and titled in the state of New Jersey.  It was then sold to Scott Rosen while undergoing a complete restoration.  Upon completion, Rosen attained a New Jersey title in 1997.   Later that same year, Rosen sold the car to Jeffery Schwartz who registered the car in New Jersey.  Schwartz sold the car back to Rosen in 2000.  Paul (Barney) Hallingby bought the car from Rosen on November 29, 2000.  Hallingby has owned 0799 GT ever since.

The Ferrari has been shown in numerous Concours including the Cavallino Concours in Palm Beach in 2001, only months after it’s purchase.  Additionally, it has been shown at the Greenwich Concours, the Ferrari Club of America Concours, and Lime Rock Labor Day Show of Shows and was an award winner in all three.  Hallingby continues to display the car, particularly when there is a charity involved which he wishes to support and help raise money.